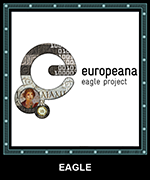 EAGLE (Europeana network of Ancient Greek and Latin Epigraphy) is a best practice network co-funded by the European Commission under its Information and Communication Technologies Policy Support Programme. The Consortium is composed of 19 partners from 13 European countries; the Project Coordinator is Sapienza University of Rome and the Technical Coordinator is Promoter Srl.

The project laid its roots at the end of the 1990s, when an international Federation of epigraphic databases, under the aegis of the Association Internationale d'Epigraphie Grecque et Latine (AIEGL), paved the way for the establishment of a centralised database on ancient epigraphy. In 2005, the Federation was headquartered in Rome at the Centro Linceo Interdisciplinare “Beniamino Segre”.

Today, EAGLE aims at collecting and cataloguing in a single database over a million and a half images and other digital objects related to hundreds of thousands of inscriptions from the Greek and Roman world, provided with additional information and, in many cases, with their translation in English or other modern languages.