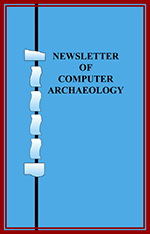 Started in 1965 under the initiative of the Department of Anthropology, Arizona State University, the Newsletter was edited by Robert G. Chenhall until 1971, and then by Sylvia Gaines.

The first issue was entitled "Newsletter for computer archaeologists" and, being a pilot attempt, was sent by the Editor for advise to each of the colleges and universities in the United States, which had graduate degrees in anthropology, and to about forty potentially interested individuals asking them if the newsletter really fulfilled a worthwhile need.

The aim of the Newsletter was to give account of the work done utilising computers, with the belief that systems and automata could serve as «prostheses which will extent the brain’s ability to manipulate symbols just as the bulldozer is a prosthesis for muscles and the microscope, telescope, spectroscope, and laser are for the eye».

The Newsletter was discontinued in 1979, but in 1983 it was re-launched under the title "Advances in Computer Archaeology", edited by Sylvia Gaines. Publication ended in 1988.